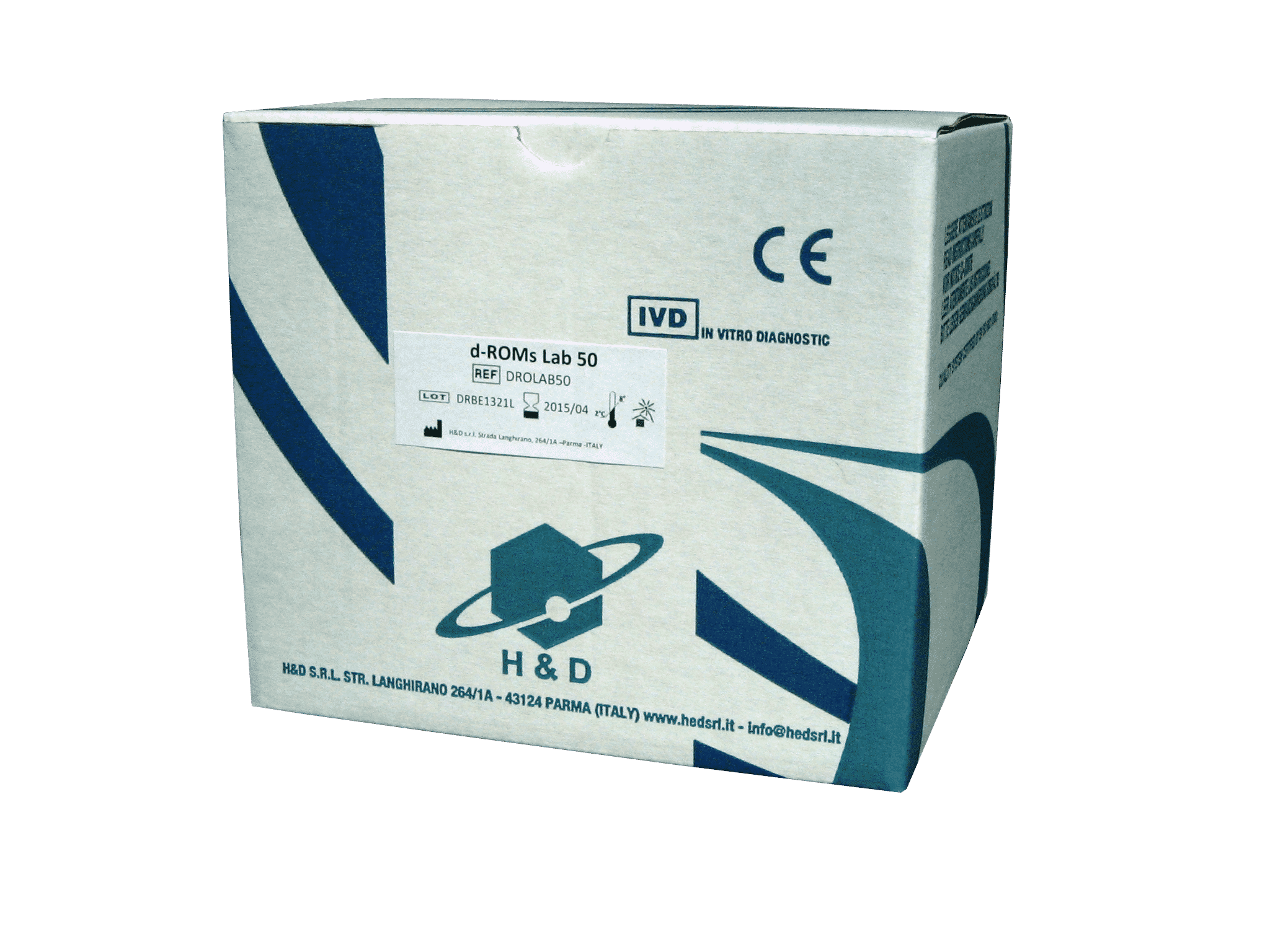 The d-ROMLab test, developed by the renowned scientist Mauro Carratelli, is the laboratory version of d-ROMs test, a photometric test that allows to assess the pro-oxidant status in a biological sample, by measuring the concentration of hydroperoxides (ROOH). Hydroperoxides, also called Reactive Oxygen Metabolites (ROMs), are generated in the cells by the oxidative attack of Reactive Oxygen Species (ROS) on various organic substrates (e.g. carbohydrates, lipids, amino acids, proteins, nucleotides, etc.).

d-ROMLab test is designed to be performed on general spectrophotometers usually available in laboratory or research facilities.

By adding to this sample a chromogen (N, N-diethyl-paraphenylendiamine, Reagent R2) that has the ability to donate an electron and turn its color when oxidized by the free radicals, it becomes possible to quantify the amount of hydroperoxides available in the sample by photometric reading using the dedicated analytical device, FRAS5.

The d-ROMs test principle and reactions are outlined below:

– R-OOH is a generic hydroperoxide

– R-O* is the alkoxyl radical of a generic hydroperoxide

– [A-NH2*]+ is the colored radical cation of the chromogenic substrate

Due to the chemical heterogeneity of alkoxyl and peroxyl radicals generated during hydroperoxides breakdown, the results of d-ROMs test are expressed in arbitrary units, called CARRATELLI UNITS (CARR U), where 1 CARR U is the equivalent of 0.08 mg/100ml of H2O2.

The accuracy of the method was validated by integrating the electrochemical data with the results obtained with Electron Spin Resonance (ESR) spectroscopy, similar profiles being developed using both methods. 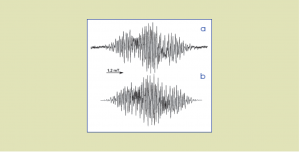 The free radical research of the past 60 years has proven beyond a reasonable doubt that redox imbalance, translated into oxidative stress if not addressed promptly, is a major contributor in aging and the development of degenerative and chronic diseases such as cancer, diabetes, Alzheimer’s disease, Parkinson’s disease and rheumatoid arthritis. Therefore, assessment of pro-oxidant and anti-oxidant status in healthy or diseased subjects is of major importance, as it provides information about the redox status of the terrain of the subjects. An oxidative environment is prone to progression of disease, while a redox balanced environment is supportive of the healing process. Achieving redox balance should be a goal of any treatment plan or scientific endeavor in the pursuit of achieving health restoration.

It is important to note the difference between information provided by the d-ROMs test and other available testing methods of pro-oxidant markers, such as malondialdehyde (MDA), lipid hydroperoxides and isoprostanes.

Hydroperoxides (ROOH) are the earliest markers of oxidative stress in a biological system, therefore the most sensitive ones and the first in line to show a change in the redox status of the system. It is a significant difference in the interpretation of the results when hydroperoxides are compared with late-stage oxidative stress markers such as malondialdehyde (MDA). Fluctuations in hydroperoxides values can be very swift as a response to treatment or lifestyle changes, while malondialdehyde (MDA) require a much longer time to change value and provide feedback. (Fig. 2) 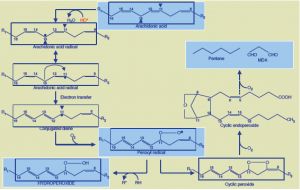 MDA (malondialdehyde, CHO–CH2– CHO) represents one of the terminal products in the chain of reactions set off in cellular membranes by oxidative attack of Reactive Oxygen Species (such as the hydroxyl radical HO*), on polyunsaturated fatty acids like arachidonic acid, a constituent of membrane phospholipids. In this case, the chain of reactions has the peroxide radical at the crossroad of two possible pathways, as it can be converted into hydroperoxide (by acquisition of a H) or can generate cyclic peroxides which may undergo further oxidative reactions and generate a series of terminal products of oxidation, one of which is malondialdehyde (MDA). The oxidative reactions leading to the formation of MDA are made possible by the exhaustion of the antioxidant defense system of the environment in which the oxidative process takes place. Therefore, MDA, as one of the terminal products of oxidation of membrane polyunsaturated fatty acids, is a late indicator of oxidative stress.

The main difference between the malondialdehyde (MDA) assay and the d-ROMs test is the stage of oxidative stress that is signaled by both tests. Unlike MDA, a late stage indicator of oxidative stress, the hydroperoxides (ROOH) are compounds that form early in the sequence of oxidative reactions of membrane lipids, are relatively stable and still conserve an oxidant capacity that can be revealed in a redox system based on Fenton’s reaction, such as the d-ROMs test.

Therefore, the d-ROMs test is able to present altered oxidative states much earlier than the MDA assay, and due to its sensitivity, it provides real-time feedback to therapeutic and lifestyle changes, empowering the decision making process.

There are differences between d-ROMs test and assays designed to measure only lipid hydroperoxide in biological samples. Lipid hydroperoxides assays require a deproteinization and extraction phase of the sample, that takes relatively long time (about 30 minutes), and provides information limited to lipid hydroperoxides, only one class of all the hydroperoxides available. Alternatively, the d-ROMs test does not require any treatment of the sample (only centrifugation if whole blood is used), it is quick (it takes less than 3 minutes) and, most of all, it provides a complete assessment of the pro-oxidant status in the sample since it measures all the available hydroperoxides in that sample (derived from lipids, but also from other substrates such as amino acids, peptides, nucleic acids, carbohydrates etc.).

Assessing the level of plasma 8-isoprostane is commonly made by means of an immuno-enzymatic assay. In a recent comparative study, regression analysis showed a direct and significant correlation between plasma levels of 8-isoprostane and the d-ROMs test (r=0.68; p<0.05).