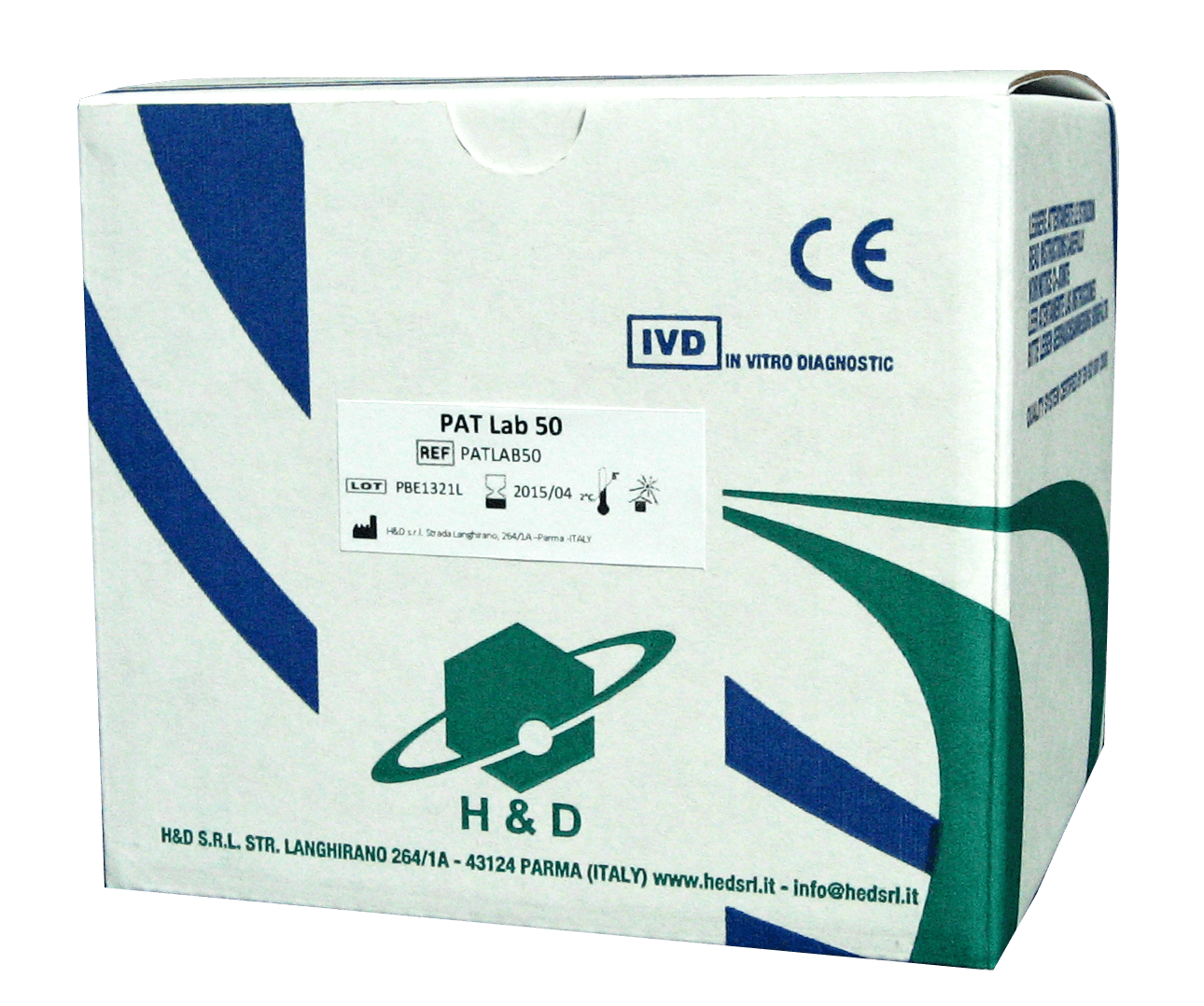 PATLab test is the laboratory version of PAT test, an automated test designed to assess the antioxidant capacity of plasma by measuring its ferric reducing ability. Ferric to ferrous ion reduction causes a color change that can be photometrical assessed.

PATLab test was developed by Prof. Umberto Cornelli of Loyola University Medical School of Chicago and it incorporates significant biochemical and technological improvements compared to its predecessor, BAP test, by reducing the interference of plasma phosphates in determination of plasma antioxidant capacity and by reducing the processing time to only 1 minute.

PATLab test is designed to be performed on general spectrophotometers usually available in laboratory or research facilities.

In the PATLab test, a small amount of plasma(10 µl) is added to a colored solution, obtained by mixing a source of ferric ions (Reagent R2 – FeCl3 ferric chloride) with a chromogen (Reagent R1 – chromogenic mixture containing thiocyanate). After only 1minute of readingtime at 37C, the solution will change the color and the intensity of this chromatic change will be directly proportional with the plasma ability to reduce the ferric ions to ferrous ions, according to these reactions:

By photometrically assessing the intensity of discoloration, the amount of reduced ferric ions can be adequately evaluated, thus allowing an effective measurement of reducing ability or antioxidant capacity of tested blood plasma.

Preliminary data from healthy subjects indicate that normal value for PATLab test is between 2,200 and 2,800 U. Cor. (Cornelli Units), where 1 U. Cor = 1.4 µmol/L of ascorbic acid. Values lower than 2,200 U. Cor. indicate a reduced biological antioxidant capacity and require clinical attention.

As a mean of prevention, PATLab test may be routinely performed on all clinically asymptomatic subjects that are exposed to factors able to reduce physiological antioxidant plasma defenses such as polluted environment, inadequate exercise, unbalanced diet or chronic inflammatory diseases with reduced absorption of nutrients.

Since chronic oxidative stress is at the root of multiple chronic and degenerative diseases, rebalancing the redox status in the patients’ system must be a priority of any treatment plan. PATLab test provides valuable feedback about the evolution of the antioxidant defense in subjects undergoing specific therapies, either alone or in combination with antioxidant therapies.

The overestimation of plasma antioxidant capacity can be addressed by using the right amount of zirconium salts that have the ability to bind to plasmatic phosphates, without causing their precipitation.

Unlike other commercially available tests,PATLab test reagents have in their composition a zirconium salt that binds plasma phosphates, avoiding phosphates’ interference in the Fe3+ reducing reaction and therefore enabling an accurate and repeatable assessment of the reducing capacity of plasma.

PATLab test reagents also feature a stabilizer aimed to avoid uncontrolled reactions and preventpolarity modifications of the Fe(SCN)3 compounds, enabling the formation of stable molecules that can be further quantified by spectrophotometric readings at 505 nm.

One of the major features of the FRAS system is the integration of d-ROMs test and PATLAB test values into a single value – the Oxidative Stress Index (OSI), that offers a simple and convenient, yet comprehensive picture of the oxidative stress status in a biological system.

The OSI index does not substitute the d-ROMs and PATLAB test results, but it complements and enhances their value.